We decided to have a Kinect Bowling Christmas Party. For those of you unfamiliar with a Kinect, it’s a video game device that requires no controller. You just flail yourself around to move objects, like a bowling ball. So I planned this get together for Friday at 7:30pm, even though I don’t get off work until 6. And to make it even more of a challenge, I didn’t do any food prep for the party (with the exception of mixing some onion soup mix into some sour cream the night before.)  So could I have it read to go by 7:30?  Timeline if you please.

Pull out the pretty red chargers my sister-in-law bought me and put them to my favorite use, displaying appetizers. Bright, plastic, shiny & affordable they work for a million things.  Dump store bought hummus into a dish, sprinkle with paprika for color and dump out pita chips. Dish One done by 6:18pm

I stole this idea from Nigella Lawson. She used different topping, but the thought it the same. One bag of tortilla chips makes about 75 appetizers.

Glam up your Tostitos

The seafood salad has lots of pretty red and green flecks in in.

Topped with pimento cheese spread made with a very sharp old cheddar. From the store. This is very much a non-homemade party

They all turned out kind of nice

7pm. Time to make my Egg Nog. Storebought Nog of your choice. Divide into 2 pitchers. One for the boozy nog, one for the virgin nog. Fill pitchers about half way up. Give boozy nog a slight splash of vanilla. Give virgin nog a good splash of vanilla. Then beat two egg whites until fluffy and slowly fold half of the mixture into each pitcher. To the boozy nog add as man shots of bourbon as you feel comfortable with. We did two. Then softly whip about half a cup of cream and fold half into each pitcher. Then either grab a nutmeg and grate some on top of each pitcher or sprinkle a little ground nutmeg from a jar on top. I love the jar of nutmeg I keep in the freezer. I feel like a chef whenever I grate some onto something.

Tim put out the cookies I baked earlier in the week. He’s excellent at arranging.

Now it was time to work on me.  The Christmas sweater only comes out one or two times a year. Along with the Santa Hat.

7:29: Tim fires up the Kinect. The Christmas Lights go on, the regular lights are dimmed. 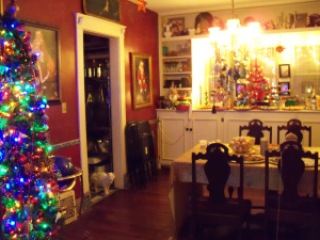 This site uses Akismet to reduce spam. Learn how your comment data is processed.

This is a text widget. The Text Widget allows you to add text or HTML to your sidebar. You can use a text widget to display text, links, images, HTML, or a combination of these. Edit them in the Widget section of the Customizer.