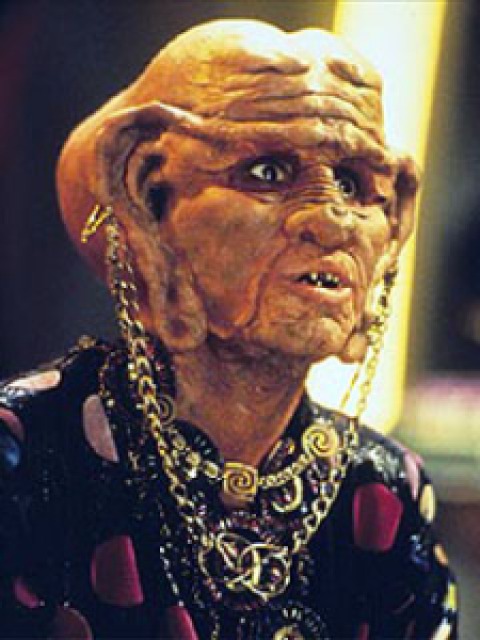 I’ve had the pleasure recently of re-watching all of Star Trek: Deep Space Nine again on Netflix and Amazon Prime. It has always been my favorite Trek series, even though back when I watched it for the first time in the 1990s, I thought the pace was a little slow sometimes.

Now that I’m binge-watching, I see something else. Of course, I don’t have to wait a week or months between episodes now.  While you might think at first glance that DS9 is the story of The Emissary and of Bajor, I think it there’s another story arc that stands out: the rise of the House of Ishka.  Quark’s mother played the game of thrones perfectly – and she won.

In the first episode, we meet Quark, the greedy, shady, Ferengi bar owner and his nephew, Nog, a petty thief who is breaking into quarters .  Later, we meet Quark’s brother and Nog’s father, Rom. Rom is seemingly a babbling idiot.

Early on we learn that there’s a little more to everyone than we first saw. Nog wants to go to school and learn. Rom actually takes part in a plot to bump off his brother. And we learn that Quark is sharp and smart and sometimes has a tiny bit of a soft spot.

We also learn that Ferengi females do not have it easy. They are forbidden to travel, so they can’t leave the home world. They are not permitted to wear clothes. (It invites others to unclothe them)  They cannot earn profit own. (Profit is to Ferengi what honor is to Klingons and logic to Vulcans – the entire basis of your standing in society) They mustn’t speak to strangers, and they even have to chew the food for their husband and sons.

By the time the series moves into season 3, we learn that Nog wants to be the first Ferengi to attend Starfleet Academy.  He knows, that like his father, he’s not good at earning profit, and he wants a different kind of life for himself.  Rom, it turns out is a mechanical genius. (he once fixed a holodeck with string and a spoon)  However, being a mechanical genius doesn’t matter in Ferengi society, so he’s stuck as a lackey for his brother Quark.

Then we meet Quark and Rom’s mother, Ishka.  She’s in big trouble back on their home world. Not only is she wearing clothes and talking to strangers, she’s EARNING PROFIT. If she doesn’t fess up and give the profit back, Quark will lose his assets and his mother will be put into indentured servitude.  Quark is horrified to learn that his mother has earned far more money than the Ferengi authorities know about. Much more than he could ever pay back by turning over all of his profit.

We learn that Rom is Ishka’s favorite because he is just like his late father Keldar. Keldar had no head for profit, but he was a kind man who understood people. Quark, on the other hand is just like his mother, ruthless with a sharp head for business.  But he’s unwilling to budge on Ferengi law. He thinks the law is the law.

Rom and Ishka come up with a plan where it appears to Quark and the Ferengi authorities that Ishka has given back her profits and repented, when she’s actually kept 2/3 of her profits and plans on doing a better job hiding her transactions.

Meanwhile, Rom’s mechanical abilities do not go unnoticed and he begins to work with engineering on Deep Space Nine as his son goes off to Starfleet Academy.  Since, we know that Nog has gone back to see his grandmother for extended visits, you have to wonder if she wasn’t the one who put the bug in his ear about attending Starfleet.

Ishka begins a relationship with Grand Nagus Zek – the political and economic leader of the Ferengi Alliance. His mind is beginning to fail, and Ishka becomes the power behind the scenes, offering economic and political advice.

Quark ultimately sees that his mother is doing what’s best for their people and supports her, even though it troubles him to see society change so rapidly. When she’s kidnapped, he helps lead a rescue along with his brother and nephew.

When the Nagus decides to retire, he names Rom as his successor. Ishka’s son begins to implement rights for females as well as introducing a legislative body to rule the Ferengi along with other reforms.

Ishka retires to the Risa leisure planet along with Zek, though you can assume that her firm hand is still guiding her son Rom in his role as the Nagus.

Her grandson becomes a decorated officer in Starfleet and is surely on his way to being a captain, perhaps even an admiral someday, paving the way for other Ferengis to succeed as part of the Federation.

Quark, who just like Rick in Casablanca has his large ears open of everything, is still at the bar, taking in important intelligence that he can share either with the Federation, his brother, or to turn a tidy profit for himself.  Because everybody comes to Quark’s.

Ishka changed Ferengi society forever and rose to a position of power without killing anyone and while ensuing the safety of her boys and he grandson.

She played the game of thrones, she won, she made profit, and she got to retire and enjoy it.

This site uses Akismet to reduce spam. Learn how your comment data is processed.

This is a text widget. The Text Widget allows you to add text or HTML to your sidebar. You can use a text widget to display text, links, images, HTML, or a combination of these. Edit them in the Widget section of the Customizer.